New Amigos ready to fly from Santa Maria
Published in the Majorca Daily Bulletin
on Sunday 1st November 2015
By Shirley Roberts
Lakki Patey is a name you might be familiar with if ambient guitar music and experimental sounds are your interest.  This is a man who when asked what he does for a living would answer ‘I am a musician, inventor, sailor and adventurer.  The question is how many lives can you pack into 50 something years?
Lakki took his guitar from Norway and made music all over the world.  India, Brazil, the Americas were his playground as his career took off.  His American years are well catalogued and being part of the groups Windflowers, Hot Cubanas and Some Like It Hot earned success and recognition.  Ten Albums later plus awards for the best Ambient Music of the year happened in the 1990’s. Lakki enjoyed his travels and music fired his soul and enabled his life.
The wanderings of a musician with an ambition to see the way that music gets into the heart of all cultures led him to places that he couldn’t speak the language. There was not a lot of call for the Norwegian language, English was the ice breaker in most places but not everywhere.  Communication began to occupy his mind when when music didn’t.  Music builds bridges and cuts out the need for the verbal.  The guitar doesn’t need a language to speak it has its own song no matter what the nationality of the artist.   He accepted all this but his brain began an inventers journey on those travels that was to take him to a new world.
Lakki had time in his travels to think about communication and on a trip to French Guyana he resolved to speak French in one form or another before his journey ended.  Time hanging out between music sets was spent listening and recognising that the hundred-word principle was very evident. You can understand 50% of any language with the knowledge of the 100 most frequently used words. He evolved a translation of some of those words and began playing a simple game with local friends. This, in essence was where New Amigos was born.
The research, development and team building of the project was all consuming and Lakki diverted his brain from music to big business.  The concept of New Amigos, which in its simplest form is a board game had so many possibilities and they all needed a practical outcome. The game whether used at home, school or in language cafes builds on the same principle we all used when we first learned how to speak.  It involves recognition imitating and memorizing which enables the players to go from zero to fluent conversation while having fun. The game contains the 1800 most frequently used words, common sentences plus quiz and role play cards. This all helps the players to speak correctly in past, present and future tenses
New Amigos was launched in Norway in 2002 and was an immediate success selling 15,000 games in three months in a population of just 4.5 million. Lakki by this time was joined in the New Amigos world by Hilde his wife and together they knew that the game was so important that it couldn’t be allowed to sit on shelves in toyshops. The gypsy in the souls of Lakki and Hilde began and together with a camper van and the New Amigos game they went on a European road trip which was to last for some three years. 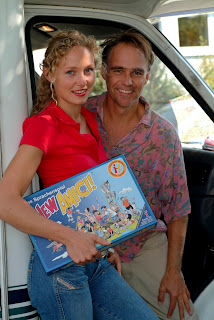 The mission of the trip was to open New Amigos language cafes wherever they stopped. They were like missionaries arriving in a place and spreading the word that the ability to communicate was all you needed as a cornerstone for a harmonious world. The café principle was that the games would be provided in the language of the country and English or any other language the country wanted. Soon they were approached to provide games between German and French or German and Russian and the notion of New Amigos being used in a global sense was becoming a reality.
Their travels took them to many cities in Germany and it was there that the café concept became huge.  People were playing the language game all the way from Berlin to Cologne.   The camper van moved its way slowly round France and Belgium and all the land mass of Europe.  Parking beneath the Eiffel Tower with a van full of board games was the stuff that memories are made of but then it was time to go home. The publicity this game generated meant that the business applications Lakki was being asked for needed orchestrating from an office not a camper van parked in the the middle of a European suburb.  The Van made its way back to Oslo and Lakki and Hilde put their business brains on and created a brand and a concept that received some very special endorsements.
In 2008 Angela Merkel and Vladimir Putin were seen playing the New Amigos game. Mr Putin speaks fluent German but they were demonstrating the importance of being able to communicate with each other in this fun way. They did this in a very prestigious location much to the delight of New Amigos who had no idea this was going to happen.  Germany was also the place that a nationwide competition was launched using the game which was sponsored by major German companies like Gazprom, the Russian Oil company.  Lakki’s dream of making all nations understand one another’s language was on its way to realization. A company was formed and the game developed and was refined and updated regularly as it still is today. 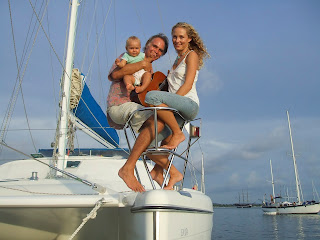 The call of the sea was next in this couple’s creative surge.  Music was always there, New Amigos was achieving the ambitions they set for the project and now it was time to go and find inspiration for the next phase of their lives. A sailing catamaran filled the space in their heads for adventure for the next five years.   They took to the water and had the best time communicating with the worlds people and creating the friendships of the sea.  Along came two little children whose first steps were learned on the boat and now it was a sea faring family journey that they were embarked upon. 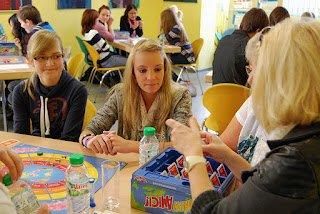 Music in the shape of the New Amigos Orchestra and many other inventions were crowding the brains of this entrepreneurial couple.   This coupled with the fact that their children would need soon to go to school made them consider where in the world they wanted to live.  They visited Majorca in 2005 for a week of sunshine in Santa Ponsa and it was a place they had fond memories of.  Majorca didn’t immediately jump off the atlas to them when they made their plans but more and more their research told them that it filled all their criteria.  They wanted to live amongst an international community in a stunningly beautiful place with good infrastructure and weather. The flying time and accessibility to the rest of Europe was also a big feature in their decision.
Five years ago this family made their move to Santa Maria here in Majorca and they remain delighted with their choice. The New Amigos game is once again occupying their every working hour because the next phase of the world is about to be hit from Majorca. It is currently available in 28 language combinations and now it is Spain and the Spanish speaking world that are going to get their New Amigos experience. A warehouse in Santa Maria houses hundreds of games ready for distribution to people here who want to buy them for themselves or for Language Café use.
The first New Amigos Language Café in Majorca launches on Tuesday 10th November 2015 at Bar Sa Botigueta in Soller.  The language combinations for the game will be Spanish/English and SpanishGerman. This will be followed by many more cafes taking part as the interest grows. New language combinations are a possibility and are often funded by organisations with business and educational vested interests.  New Amigos are very happy to talk to all interested parties about the many ways this language learning system can be used. 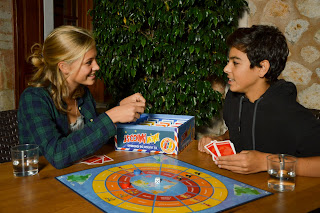 Lukki, Hilde and their newly appointed Sales Agent for Spain Libby – from Soller – are all very excited about their place in the universe being the Launchpad for New Amigos in Spain and the Spanish speaking countries.  At its most basic it is a game that people can enjoy playing no matter if they don’t have a common language.  At best it is the key that unlocks the communication door.
As I left their house in Santa Maria this week after a wonderful glimpse into their inspirational world thoughts came pouring in.  This island is full of people living their dreams and achieving their ambitions.  The creativity that Majorca produces never ceases to amaze me.  Lukki and Hilde deserve success with this Spanish launch and I have no doubt that we shall be hearing more from this great couple as New Amigos and other projects in the pipeline come to fruition.
As always dear readers – remember that you read it here first.
Call Libby for more information on 617 920 624
www.newamigos.com