Reforms, Refurbishments and Regeneration in the Soller Valley
Published in the Majorca Daily Bulletin
Tuesday 27th October 2015
Photographs by Rachel Fox
The clocks went back and the Valley slipped into instant winter mode with a sense of urgency that has been missing for a number of years.  The pennies are being counted
and builders being called in.  There is now no doubt that the Soller Valley has enjoyed its best season for years and has money to spend.  Some of the employers of the area hate to admit this because they are afraid of the staff repercussions.  There is nothing more galling for staff to be told that there is no money for pay rises when the whole area is celebrating financial success. The fair, appreciative bosses will do the right thing and the rest will have to wait and see if their staff turn up for next season. Success also means that people have a choice when it comes to work – this is a factor which has also been missing for the past few years.  So it’s all change in the employer/employee work life balance and relationship in the Soller Valley .
The projects that are springing to life are new hotels and rebranding of existing.  The Port of Soller is losing most of its three star hotels to the builders and fine plans are on the drawing board.  New projects of new homes developments mean that the Estate Agents of the area are delighted and the queue of relocaters is never ending.Every incomer brings an idea and many of them bring new businesses.  This is fascinating to watch as Radio stations and Computer games manufacturers jostle for position and new staff  right on our doorstep. 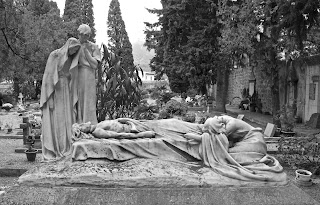 While all this high finance is happening the City of Soller slips into its winter village mode.  This is the time when locals have a little more time for friends and family and the celebrations of autumn.  The Fiesta of All Saints on Sunday 1st November is almost upon us and already Soller is welcoming returners who make their annual holiday around this time.  The cemetery is filling with the michealmas daisy tubs and fine flower arrangements and this increases by the day until the mass gathering next Sunday.  On that day the beautiful Soller Cemetery resembles a busy railway station as people arrive and meet family and chat to their dead family and friends.  The noise level on the day only quietens when the priest arrives to preside over the All Saints Mass held in the open air for all. Family lunches and gatherings on the beach and in the mountain picnic areas happen after the cemetery visits.  The grounding of everyone back for awhile from where they came is a great sight to see.  The sadness of the occasion is outweighed by the joy of the living in one another’s company. 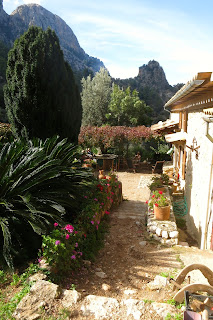 Meanwhile behind the closed doors of the Town Hall and the Red Cross offices hard work is underway.  The refugees are due to arrive in Majorca any day now and in a few months time the first group will arrive in Soller.   The refugees committee are a cross section of the Soller community but poignantly include people who were once, themselves, refugees.  The Bosnian Community that arrived her over 20 years ago escaping the Siege of Sarajevo are now an active part of the group looking to welcome the Syrian refugees. The circle of life is inspiring and a video of this story has just been aired on national television. 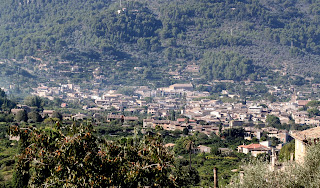 The Soller Tunnel is closing this week for a few hours overnight – between 23.00 hours and 4.00 am.  This is on two evenings, for essential maintenance but this has a funny effect on the Soller mindset.  The idea that you are cut off from the rest of the island and that it would take the negotiation of a mountain and 53 hairpin bends to get to the other side in an emergency is daunting.  No wonder that the philosophy that Soller is an’ Island within an Island ’ took root.   This theory is still felt by the older generation and those of us who have lived here for any length of time.  It really is only the newer arrivals who are nervous about being cut off the rest of us think that we have all we need to exist on this side of the Coll.  The exception to this is the hospital – we don’t have one here – although local chatter says that sites are being evaluated for that purpose. The bigger the population gets the more realistic this idea becomes so we wait for the next important fiscal announcement.
This is the winter of change, building and spending money on necessary improvements.  These are days we thought would never come back so it is with double joy that we welcome the beginning of a new set of good times in the Soller Valley .