Sep 20 at 6:15 PM
Soller -The Island within an Island
Published in the Majorca Daily Bulletin
on Tuesday 22nd September 2015
Photographs by Rachel Fox
The Soller Valley is in recovery mode from the thousands that descended on us this weekend for the Havaneres Festival.  A three day celebration of the music of the exiled fishermen has a huge following.  I talked to people that had flown in from the Costa Brava, Barcelona and Madrid and others that had found their way from Costa Rica.  This is a very slick operation here and as the Fiesta has been going for the past six years most of the teething problems have been ironed out.  The first thing you notice is the professionally erected stage on the Repic End of the beach – near Agapanto Restaurant.  This is followed two hours before the performances by the rumble of the lorries unloading tables, chairs and pop up cafes and restaurants on the beach.  Meanwhile back on the Promenade the established restaurants have special permission to make the whole area a giant outdoor restaurant. 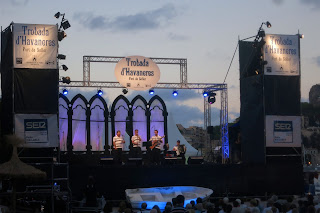 The car parking was extremely well organised for this event and the Soller Train and Tram came up trumps.  They put on a special 10€ deal from Palma which included the return Train trip and a return Tram journey up to meet the train from the beach.  Thousands poured off the tram and on to the Beach and I was glad I had booked my table with a view over a week ago! The weather remained perfect for all three days and we were all content except for ‘Mr Angry of the Repic Beach ’. 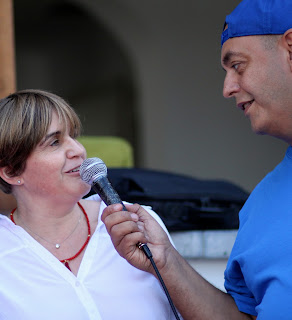 On Friday, Sollerweb and Radio One Mallorca had a party on the Repic Beach .  Diablo V the famous DJ from Radio One hosted his three hour show from the Marina Hotel and we introduced on air a number of local business people and fun characters from our Valley.  The music pumped away in-between chats and everyone was having a great time.  Then a red faced, angry man stormed up and said we were disturbing his siesta and that he came to the Port of Soller for silence and solitude.  Oh dear – he really did pick the wrong weekend – our party lasted from 2 – 5 in the afternoon and then the Havaneres went on mega loud speaker from 7 pm till midnight on three consecutive nights.  I would think that by now he thinks that he has landed in a parallel universe where the rule book has gone out of the window. 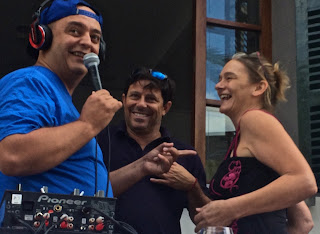 The overwhelming consensus was that everything we did, from Radio One’s visit to the Havaneres Festival was a class act and our friends in high places at the Town Hall were very happy for the business that poured into the Soller Valley as a result of all this promotion.
On Saturday morning visitors to the Soller market were treated to a dance display by the Aires Sollerics and visiting dance groups.  The youth band was playing and the music was young and happy and everyone wanted to tap their feet along.  No instruments are used which need plugging in and that is the key to the music of the mountains.  The people of the Soller Valley have a history from their isolation years of being able to make their own amusement.  Music, dancing, poetry and prose are a feature of everyday life and not saved for fiesta days.  If it is Saturday, the sun is shining and there is the potential of an audience, the musicians, drummers and dancers are often on display. 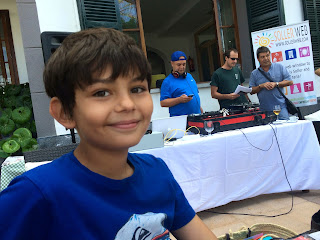 Saturday morning markets in Soller always have an element of surprise.

Radio One was followed by the local TV Station filming from the Science Museum of Soller this weekend. We are very high profile at the moment and that is because so many publications in the UK, Sweden, Germany and mainland Spain are running articles about this area with an emphasis on Soller, Deia and Fornalutx.  I know a little about this because I have written a few of them myself!  I had a meeting with the Mayor of Soller last week and amongst the points for discussion was whether Soller had reached saturation point with its visitors.  The consensus was that this area has much to offer and just needs a balanced, year round view of tourism for everyone to be happy.  For a few weeks of the year we appear to be mega busy but then it all calms down and is more than manageable.  The key is ‘how to manage success’ and that is the subject for autumn and winter discussions. 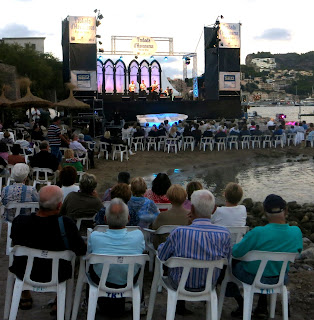 The autumn equinox happens this week and that is the sign for us to be planning the winter happenings of the Soller Valley .  At Sollerweb we fill in the events calendar and run a special page on the website to let readers know which hotels and restaurants are remaining open for the autumn and winter.  Come and see us soon we are just as beautiful as it gets cooler and our welcome to you from the Soller Valley is very warm.