Life is sweet in Soller
Published in the Majorca Daily Bulletin
Tuesday 1st September 2015
Photographs by Rachel Fox
So many ex pats miss their favourite sweets and chocolates when they relocate.  They fantasise about Cadburys chocolate and sherbet lemons and bring bags back when they visit the UK .  Our local Majorcan friends think we are mad because they firmly believe they have the best chocolatiers and sweet makers in the world right here.  The bakeries of Soller rival any French patisseries or the Patisserie Valerie chain that we love in London .  The cakes and desserts are such in Soller that every Sunday you see queues of people form outside the bakers to collect the industrial sized cakes and pastries that are bought as pudding after Sunday lunch.  The giant sized ensaimadas stuffed with custard, chocolate or cream is a firm favourite and the crème brulee version is kept for special occasions. 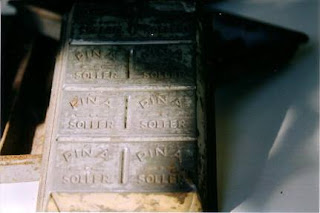 Behind the doors of the bakeries in the heart of Soller are many stories of the days when Soller was the centre of the Majorcan universe as makers of the finest chocolate.  I was in pursuit of a story about these rival chocolate factories this week and it took me to the Lluna and four other locations in the heart of our City.   The story starts with the returners from Puerto Rico who came back to Soller around 1900 after going off to the Spanish colonies when the orange harvests failed in the Soller Valley .  These young men learned many skills and acquired new tastes while they lived in the Americas and brought them back with them to Soller.  Chocolate was one of the tastes that they were convinced would sell to the sweet tooth of the Majorcan people.  Except that it didn’t quite work out that way and the chocolate boys had to enlist the help of the medical profession.  The Drs in the US claimed medicinal benefits for chocolate especially in the feel good endorphins that it was supposed to release.  Soller people were suspicious of this new taste and it was only after the Dr’s explained that it was ‘good for your mood’ – in other words equivalent to Prozac that people started to taste it.   After that there was no going back and between 1900 and 1960 there were five chocolate factories in Soller, the last one actually closed in 1980.
Lluna 36 is now a very fine restaurant but for 60 years it was the home of Chocolate Pina.  Pep and Margerite Pina made the chocolate by hand and used the locally produced electricity of Soller to heat it to the required temperature.  The machines were acquired over the years and the chocolate makers’ task grew a little easier.  The chocolate produced in Soller was exported to the mainland and beyond and the reputation of Soller chocolate was held in high regard.  At one time there were over 40 Artisan chocolate makers in Soller and French influences were added which brought nuts and nougat to the chocolate and kept them always ahead of their game.
Soller today is a vibrant small City in the heart of the Tramuntana range of mountains with its own horse shoe bay that takes it out to sea in the Port of Soller .  It is a hard working place that welcomes tourists but it is not just a holiday destination.  The Soller Valley at the turn of the century was a hive of industry with over 20 factories in full production each working 24 hours a day.  The textile stories of Soller tell of this era and the contribution to the overall economy that this made.  The oranges and olives were the chief export of the area but don’t underestimate the part played by silk, shoes, cotton, soap, olive oil, almonds, ice and chocolate.
The people that made Soller great in the past 100 years were the workers whose aspirations and vision were ahead of their time.  The stories are only now beginning to emerge of the many businesses and brains that made this place unique.  I have access to archives and information and am loving the stories and the people I find there.
‘Soller Shirley’ is on a personal mission to let a new generation appreciate what the Soller people of the past did to create this wonderful place that we live in today.  The combination of hard work. Industry, culture, art and music are simply irresistible and why so many are choosing this place to relocate to.  Anyone starting a business in Soller in 2017 has a very hard act to follow but there is ‘something in the water’ here – success follows innovative ideas and hard work.
As for the chocolate – the old tastes are still out there and can be found under the brand names of Pina, Joy, Stork, Deia, Cortes and Pastor.   A mission for the autumn is to taste each one – will you join me?