A CARMEN story from Soller for you.. 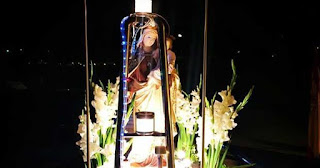 This week sees the celebrations of the’ Mare de Deu de Carmen’.
this is Mary as the Mother of God known by her Alta ego of Carmen. She is the patron saint of all seafarers. She is not exclusive to fishermen like St Peter but much more inclusive. The sea and the waters edge are important to Carmen.
In the Port of Soller Carmen is revered at the military installations that still exist in the Santa Catalina end of the Port. These days the base is used as a convalescent and holiday home for wounded sailors and military personnel. In the past this was a significant base with many Spanish Navy personnel based here.
Many people will remember the days of the Fiesta of Carmen when the sailors in sparkling uniform used to stand on parade behind their flares sited on the beaches of the Port of Soller. The lights went out and the boats carrying the Carmen statue circled the bay which was lit by the sailors and their flares.. After the parade the men would host a great party at the base and it was always a night to remember.
The Military Base is always open to the public to look around on 15th July in commemoration of Carmen. This year, for the first time ever, it was also open as a base for an Art Exhibition in the Port of Soller Fiesta. This is the beginning of the opening up of this building to the general public and the beginning of an interesting new era.
The lights will go out on Wednesday 15th July and the flares of the Port of Soller will be lit. The sailors are long gone but the memories remain…
http://www.sollerweb.com/marededeu.html