The Soller Firo takes over the Valley
Published in the Majorca Daily Bulletin
Tuesday 12th May 2015
Photographs by RACHEL FOX
This past weekend in Majorca there have been many events all over the island.  Europe day, international football competitions and many more events besides. The Grand Opening of Son Amar for the summer season and a number of official summer starts for venues and attractions.  This is really summer now and Majorca is open for business – unless you are in the heart of the Soller Valley – then the priorities change. 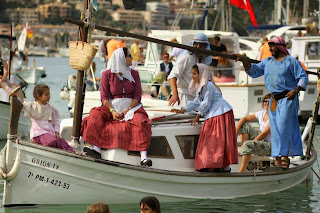 Fast forward to the beaches of the Port of Soller – no sun beds, parasols or lifeguards.  The hundreds of tourists who are here enjoying the fabulous weather can’t believe that there is no one to pay any money to for the hire of a sun bed or umbrella.  What is happening to the business people of the area to allow this month to pass without the collection of the sun bed money?  I have it on good authority that this situation will be resolved this week – after Firo.  The problem was all to do with the paperwork not being completed properly. 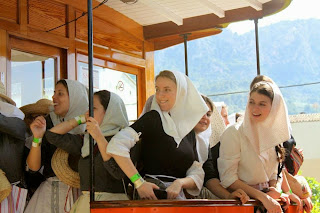 The beach concessions are renewed every three years and this was the year of filling in the forms and applying for the beach concession.  This was a two part examination – the first paper concerned the amount you intended to charge for the beds and the second paper was your declaration on how, as a beach concession, you were going to look after the environment surrounding you. Apparently the sustainability question was too complicated to consider so many people left it blank. This was then returned to all applicants and they were told to ‘try harder’.  This is the story of the delay… 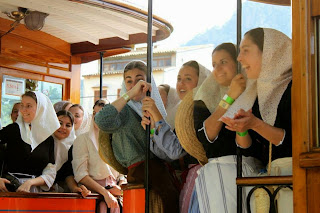 The Firo of Soller has leapt into the front pages of destination magazines for the UK , Germany and Sweden .  The numbers that have poured into the Valley in anticipation have broken all records.  The Firo is famous for having a week of wonderful art, music and culture events before the actual battle on 11th May. 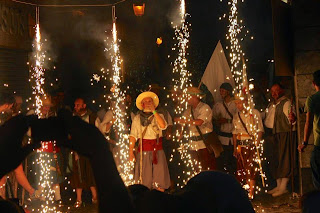 So much is going on here that the people who live in the Soller Valley have to be forgiven for thinking that nothing else is going on in Majorca except what is happening on our own doorstep.  Not for them the trip through the tunnel to the other lovely happenings in Palmanova and beyond there is simply nothing to compare with  the events right here. 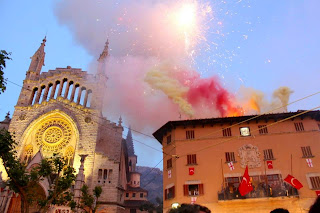 We have had six new gallery openings with works by local artists, book launches about the Capelleta Church and another for the History of the Textile Industry in Soller.  Music has been represented by piano recitals, choir performances and the Town Band giving its Firo concert on Sunday in the heart of Soller Square .  The Batucada drummers have been working overtime and the Aires de Sollerics have been playing every local instrument and dancing their way into another Soller Firo. 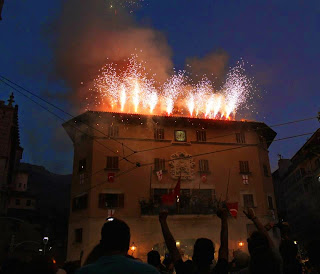 The Fun fair has been entertaining families and the candy floss and hot dog stalls have reminded us of the pleasure of childhood fairs and celebrations. For four consecutive nights Soller Square has not closed.  The live music bands and DJ sets have rocked on until 5 am and then there was silence for a few hours before the energy started pumping again. The people charged with making the Firo programme have worked hard to ensure that all members of the Soller community had something going on of interest to them.  The loudest night was last Friday when it was ‘youth night’.  The young people like their music loud and they like to party all night and sleep all day.  The other age groups are a bit more circumspect but still are very late to bed.  There is simply much too much going on and too many old friends to catch up before the Firo ends for another year. 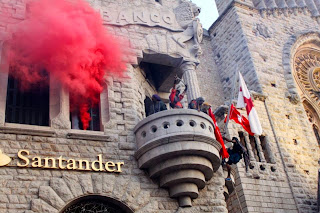 As for the battle itself the age old traditions are enshrined in the Soller psyche and its hard for an ‘outsider’ to truly enter the spirit of the occasion.  Yes you can dress the way you should, attend the events and fight the battles on the beaches but you have to be born to it to truly feel the emotions our neighbours do.  The expectation of over 8000 visitors to watch the Firo was exceeded and how to manage the crowds will be a discussion point again this year in readiness for next. 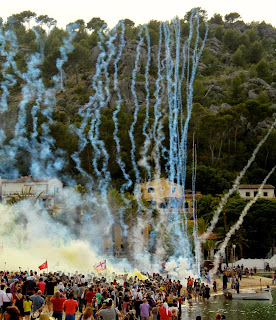 Today – the day after the Firo is a Bank Holiday in Soller and the streets are silent and deserted except for the street cleaners.  Soller is resting after a Firo well played and a celebration that thousands will remember for ever.  Well done Soller – the 11th May 1561’s victory has been celebrated and the Christians won again. 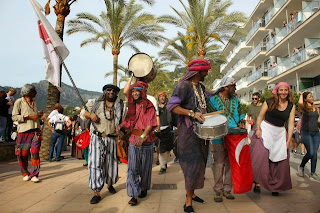