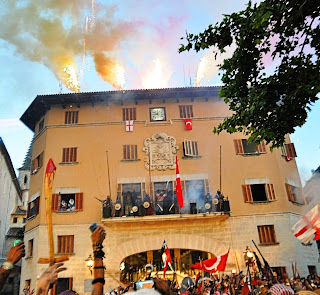 On Monday the Soller valley comes alive with the sounds of battle as the Christians and Moors battle it out. But what is the story behind this wonderful fiesta? Let us go back nearly 500 years and find out what Vicenc Mut wrote about this piece of Mallorca’s history back in 1650.
In 1502 Muslims across Spain were told to convert to Christianity so many headed to North Africa where they sought revenge. Some became pirates, sailing with captains such as Dragut, Oruch and the Barbarossa brothers. In 1541 King Charles V wanted to capture Algiers and 500 ships loaded with 24,000 soldiers assembled in Palma bay. Unfortunately, bad weather scattered the fleet outside the port and thousands were killed while Charles was lucky to escape. It left Barbarossa in control of the Western Mediterranean and Mallorca was on the front line between the Spanish and Ottoman Empires. 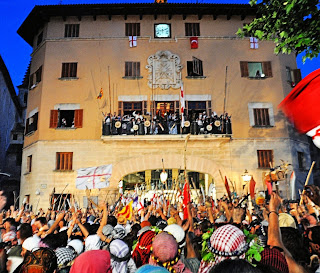 One by one the island’s villages were raided and it was Port de Soller’s turn in 1542. The raiders found little to take and burnt the fisherman’s chapel before leaving. The island’s authorities did nothing until Vizier Piali’s fleet captured over 3,000 in Ciutadella, on Menorca, in 1558. Over eighty watchtowers were then built along the coast and the lookouts warned the villagers by lighting fires.
But still the Ottomans came and in 1561 it was Soller’s turn again. Ochiali and Iusuf-Arrais combined fleet of twenty-two galleys had stopped in Ibiza and a passing ship warned Palma they were coming. Captain Joan Angelats alerted Soller’s militia and they were joined by men from Bunyola, Santa Maria and Alaro. They marched to the port to meet the fleet but found nothing.
Instead the ships had been guided by an enslaved Soller man to a hidden cove northeast of the harbour. Fortunately, the prisoner shouted a warning as the raiders landed and the guards in the Perforated Tower high on Escala Point raised the alarm.
Isuf took 1,000 men towards the port when Captain Angelats ambushed them at a bridge. The raiders panicked and 300 were killed, many of them falling into the ravine. The rest fled into hills where bandits hunted them down with their dogs. 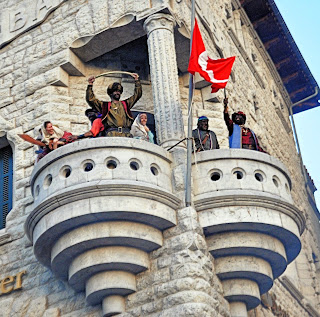 Meanwhile, Ochiali had taken 500 men towards Soller village. One entered Can Tamany, home of Francesca and Katherina Casesnoves, and while one sister knocked him out with a lump of wood, the other barricaded the door. They then threw his body out of the window, scaring off the rest. Soller’s ‘Valentes Dones’ or ‘Brave Ladies’ are remembered during the fiesta.
Ochiali’s men reached the village before dawn and climbed the village wall, taking prisoners and loot. Fathers Guillem Rotger and Gaspar Miro died fighting by the church door and a plaque remembers their sacrifice. The raiders then robbed and desecrated the treasures inside. They even chopped off the hand of the Virgin Mary and you can see the damaged statue inside today.
Ochiali’s men then headed back to the harbour expecting to board their boats. Only they ran into Captain Angelats and the militia again won the battle. They then took their prisoners to the coast and threw them off the cliffs. 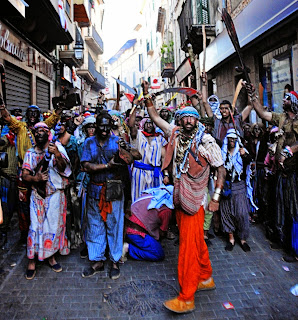 The fiesta you see today is loosely based on the events, with the townspeople playing the characters in costume. Everyone gets into the spirit of things with the militia gathering in Soller before heading to the Port. After a couple of skirmishes on the beach, there is a battle inland and then the raiders sack Soller town and take the women hostage. The evening ends with the militias defeating the raiders and freeing the captives before everyone joins in a huge celebration. The event has to be seen to be believed, so get their early to avoid the crush.
To find out more about the island’s history visit www.mallorcadaysout.comor join the Facebook page for all sorts of pictures and facts, both old and new.