Loading...
Skip to content
Do you know your neighbours in Soller?
This week The Times had a full page on the way that the British are out in force buying properties in .  tops the list followed very closely by and some longer haul places like and are also in the top ten relocation list.  This trend is more than obvious in Soller right now and the pack is being led by the ‘Media Contract Professionals’.  I have met a few recently and they are lovely people who have produced and directed most of the current programmes hitting our screens from the BBC and ITV.  What is very interesting about them is that they are not directly employed any more by the television companies. They are free lancers working on a contract by contract job.  More often than not they spend as much time with one main company but just not on their direct payroll.  The freedom that this situation gives is the reason many of them are treading the streets with the local Soller Estate Agents.  To be freed from the requirement to attend an office in or on a daily basis they can chose where they live and do the sums to see if airfares and lifestyle choices fit in with their ability to earn enough.   It is more than obvious that it does because there are just so many of them about.  I wonder if the BBC knows that the computer screens in the cafes of Soller are feeding light entertainment in the .
When you make a relocation choice your past is best left at the Airport.  No-one is particularly interested in Majorca to hear that you lived in a posh area of the or held down a number of high profile positions.  The name of the game in re location is a certain amount of re invention or starting over.  I subscribe to this view or at least I thought I did but I have been challenged this week by a poignant story out of the hamlet of Biniaraix.  ‘Bini’ as it is fondly called by some residents is a quiet place with one bar and a part time bus stop.  It sits firmly in the valley of the Tramuntana enroute to Fornalutx and is the starting place for many of the walks of the Barranc. Its quiet streets house many local families and are one of the favoured places for the relocaters.
Last Friday a ceremony was held there to commemorate one of its long term residents.  A Nobel Prize Winner whose medical work was honoured in 1980 for his contribution to understanding blood and transplantation.  Jean Dausset’s work was so important and significant that it set the scene for the wonderful developments in the transplantation and bone marrow field that were to come. Jean Dausset was a French man who loved the and retired to Biniaraix.  He married a Spanish wife and was equally at home in both cultures like so many Sollerics. The local people took this man to their hearts and appreciated his contribution to their Bini world.  Whether many of them knew of his real work or just how important he was is another matter.  The ceremony on Friday attended by the Soller ‘great and good’ and the local neighbours was held to rename a central square of the village.  It is now called and his widow accepted the honour on behalf of her husband who died in 2009.
It is always great to see new comers find their feet in Soller.  They usually start gently getting to know people and understanding the dynamics of the place and then one day they are ready to fly.  They emerge as the musicians, poets, artists and all round great people of the place and it’s just wonderful to see the talent and special personalities that are here.  We have just had Soller’s Nit of the Art and the number of contributors from the incomers of the last ten years was amazing.  One of the pre requisites to be a Solleric is the ability to party and not take yourself too seriously.  That sentiment was much in evidence as everyone was on the street enjoying the different forms of art exhibited and one another’s company. Maybe by next year the BBC input will be felt and we can begin the process of having our own Soller Festival along the lines of the Edinburgh Festival.  I have to admit that this has already been talked of and is not my original thought but hey how exciting would that be?
Our Soller neighbours know one another intimately, they went to school together as did their parents and grandparents generation before them.  The incomers only begin to fit in when they can add their story to the whole and locals can identify them in the same way as they do each other.  Who you are related to, friends with, coffee or drinks partner with is all significant and being watched here.  The fact that the new arrivals can often add so much to the experience of living here with all their varied talents is a huge plus.  We take so much from the experience of living in this wonderful place it would be great to think that we are giving something back in return. 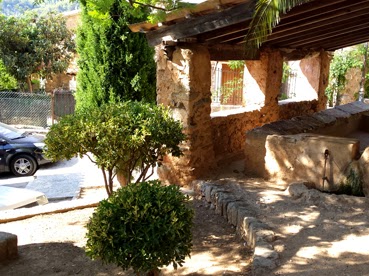