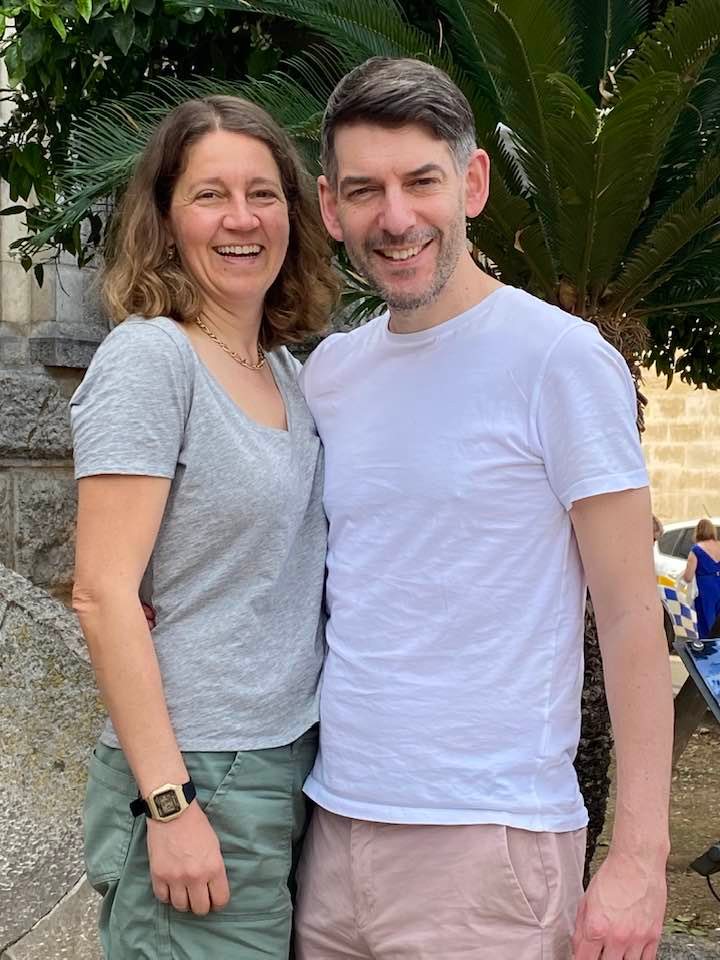 Clare and Charlie are those special people who dance in your lives adding interest and colour. They arrived in the Soller Valley around twenty years ago and added this place to their ‘significant memory box’. Clare’s friend (from the age of 8 weeks old) made a big family move to the Soller Valley which brought her and boyfriend Charlie for a visit. They had never been to Mallorca before and certainly had no idea of the Soller Valley. They were blown away at the world they arrived to. At that time any mention of Mallorca back in the trendy London world they inhabited, was met with scorn. These days any similar conversations are met with envy as the understanding has arrived in most of Europe that Mallorca is not just a couple of resorts catering for the young.

Clare and Charlie pursued their media careers in London and visited Mallorca as often as they could. They watched the family lives of their relocated friends and loved the vibe and evidence of what a great life this was for family living. On one visit Charlie was making very serious plans which included an engagement ring (nestled in a sock) being packed, in checked in luggage, on the plane! No problems there … and then it was the special room at the Hotel Esplendido in Puerto Soller, with a magnificent sunset view, all booked and ready. Like all best plans this one was met with nature intervening with a spectacular thunderstorm instead. She did say yes – once he’d found the ring.

Clare has music in her soul and after a childhood full of sound, life took over. Over recent years she has discovered the pleasure of being part of her local ‘Soul Choir’ in South London and music is back with a vengeance. The choir is a serious part of her life along with a burgeoning career and family life. Clare and Charlie married and are now the parents of two great boys, Archie 12 and Stanley 9 years. The whole family love their regular trips to Mallorca as a step off their exciting London pavements. Our Clare (Mottershead) is a Commissioning Editor in the BBC Popular Factual and Factual Entertainment Department. She’s also the current Commissioning Editor for BBC One’s Sunday night heritage brands Countryfile and The Antiques Road Show. A full career has led her to the doors of the BBC. The imagination and curiosity, which has always been her trademark, has led her into a fascinating world which she is loving. People pitch ideas to her and her fellow commissioning editors and they decide what is aired. Such a responsibility in a very tough, competitive world.

Charlie Macdonald, husband of the lovely Clare, is Ramsey Macdonald’s great grandson. The political history of one of the fathers of the labour party is his families gene legacy. Socialism runs deep and the family joke is that if Ramsey hadn’t rejected his peerage then Charlie might one day be a Lord. They all laugh out loud at that one.

Charlie is an ‘artist in a garret’, at least that is how he sees himself. Not for him the BBC and the halls of the elite. He sits alone in an office with a computer screen, earning his BAFTA nominations. Charlie is a film editor and is a highly skilled film industry professional who edits movies. He knows that much of the success or failure of a production lies in his hands. Many in the industry consider film editing to be an art, with some dubbing film editing as ‘the silent art’. His BAFTA nomination this year will be decided at the ceremony on May 8 2022. This is for a Factual Series on ‘Undercover police hunting paedophiles’.

Charlie is obsessed with football and the progress of his team. As Clare sings, Charlie kicks a football with his boys. Charlie and Archie support Brighton and Hove Albion FC, Clare supports her South London roots with Charlton and Stanley, the maverick, is a Liverpool fan. Football and their teams are their family passions.

Clare and Charlie have fascinating lives and know that there are different versions of ‘fascinating’. When they come to Mallorca and live the outdoor life and smell the orange blossom they know they are fortunate to have choice and opportunity. A huge amount of hard work, love and dedication have taken them this far on their road. They know their memory box is filled with the stuff of life. The Soller Valley is a huge part of it and is why they are delighted to be known as ‘Humans of Mallorca’.