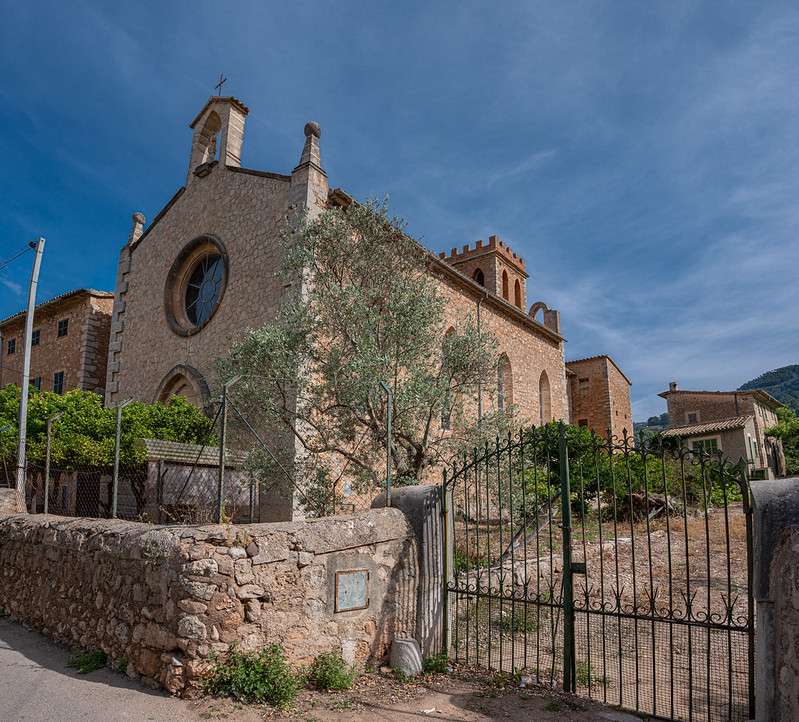 Poetissa Fca Alcover is named after a woman – A poet and a very special lady of her generation. She died in 1955 and is revered in the Soller Valley

She was a writer and journalist and wrote articles defending the Church from anticlerical attacks and to spread Catholic doctrine and morals. In addition, she excelled in the field of poetry and poetic prose. In her poetic work, she sings about the wonderful surroundings of the valley and the bay of Sóller: the Puig Major, the snow, the moon, the water, the countryside; Franciscan reminiscences echoing her own religious sensibility. Most of her poetry is written in Majorcan; very little in Spanish. She was a woman of vast culture, a self-taught poet, endowed with a singular sensitivity. In love with beauty wherever she discovered it, she sang it in her own tonality. Shortly after her death, in 1955, part of her poetry was prefaced and published by Guillem Colom,

This used to be the main road from Soller to the Port, before the fine road we have today which bypasses it.  In my lifetime here, it has gone from being a two way Street to one lane with a cycle path.  In early days for me the Street contained 2 bars, one general store, a tobacconist, a bakers, butchers and a Karate studio.  In years before that it had many other shops and L’horta locals did all their shopping on their doorstep.

Fine views at the back of the houses here on either side of the road.  The Tram runs along behind the houses on the right and then the view is majestic.  On the left side of the road the garden views watch as the Soller Train makes its way down the mountain.

A garage and car showroom plus a motorbike shop is the local industry . A short walk, up a side Street and across the tram track and L’ Horta Church springs into view.  This is Victory Church and commemorates the Brave Women of Soller who were the fiesty ones of the Battle of the Moors and Christians. This is a Street of old Soller with village houses galore.  Local families live here and watch in wonder as their neighbours houses are being bought up for high end development.  The ultra rich have discovered the L’horta Village Houses and are using builders with expensive tastes to renovate on their behalf.

This is a Street where Mallorquin is the language and ‘make do and mend’ is their life.  To watch the winter build of the Wood burner with tubing through the house is an annual art form.  To be in the company of the chatter on the doorsteps and the sharing of produce from one anothers gardens is a delight.

When we moved here we were the odd ones from London who plonked themselves in the middle of serious village life and tradition.  Neighbours didn’t expect us to stay. What we had done was not common then.  But stay our family have, and now we watch as the next lot of incomers arrive. We cluck on the doorsteps with the rest and watch the finest kitchens and marble bathrooms arriving.

The renovations of Village houses and the lives they represent cause huge discussions.  Incomers buying fincas in the mountains or new build apartments have been understood for years.  The new trend for the basic, old fashioned, village house with too many stairs and cobbled floors is less easy to understand. Especially as these areas are all about a community who know each other, often from birth.  The main consternation is that the residents will live their lives behind closed doors and not engage with local banter and tradition.

Everybody knows all about everyone and gossip is shared like air. What they don’t know they will make up and you go with the flow.

To live amongst this beautiful life requires a unique mindset which is rewarded every day.