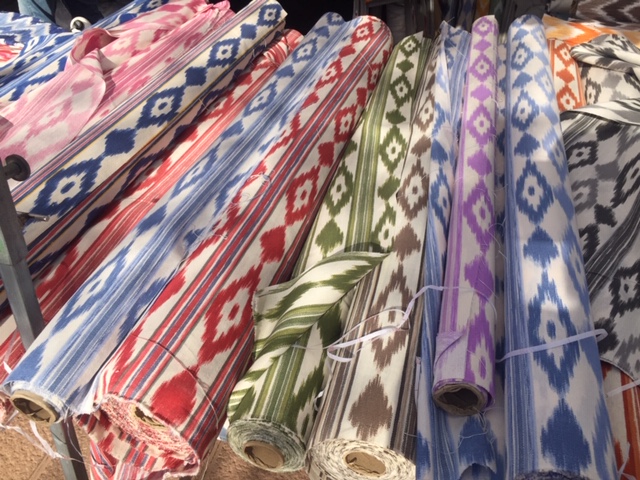 I am usually busy on Sundays and rarely find the time to go to the market. ‘The Market’ I am talking of is in Santa Maria which is one of the most traditional on the island. Soller has its Saturday market and many gather just for the chatter and the gossip. Much more important in days of old when gathering on market days was the only way of doing business and passing on chat. These days, with every communication tool at our disposal we still find time for the markets of Mallorca and the place they hold in our society.

Sollerics use Santa Maria as their Sunday market to chatter with the wider community. Even more business deals and conversation goes on here and its tricky to find a seat for a coffee. Santa Maria has a huge designated Market Square which doubles as the Ramblas on non-market days. Play parks for children at either end and then the full market spectrum in the space and down the side streets. Currently it’s not so squashed as in pre covid times as the space has to be compliant with all the rules. This gives plenty of space to walk the aisles and have a good look at everything.

In this market the rule is if you see a queue – join it. Local people are telling you something when the queue forms. I joined one for the Banuelos of the Angel. It was fascinating watching the squeezing and the cooking of the mini doughnuts. The final sprinkling of sugar meant journey time of less than 5 minutes from the pan to the mouth. I sat on the wall with my bag of deliciousness in the live animal market and watched. The children came by to purchase Guinea pigs, hamsters, chickens and canaries. No pigs or sheep today they are probably being saved for Sineu Market later in the week.

October 2021 in Santa Maria was a market for local people. Little to no tourist bargains apart from smart handbags, but lots of food stalls with huge queues. The olives were of particular interest as that queue was enormous. The vineyards of the area were well represented and shops around the market sold local wine from huge vats. They also had clusters of people enjoying a wine tasting before they made their purchases.

It has to be said that Santa Maria is a place of great contrasts. Just happening by and stopping for a coffee en route to somewhere else you would be forgiven for thinking that you had found a sleepy Mallorcan village. Not so – Santa Maria is home to one of the most impressive markets on the island and is a hub for local artisans and winemakers.ADVERTISING

Established since ancient times, from around 3000-1400 BC, Santa Maria has long had a history of wine production and also sprang into prominence during the 18th century as an exporter of brandy to many countries, both within Europe and beyond.

Brandy, wine, impressive cheese and an abundance of fruit and vegetables it really is a place to shop for the locals. I arrived early and as I left around noon the crowds were well in evidence. Many wearing masks and following the rules for crowds. It was time then to slip away and look inside the Church.

Santa Maria’s parish church is one of the most beautiful buildings in the town and is a wonderful example of Mallorca’s Baroque past, built as it was between 1718 and 1756.

This is an 18th-century church built over the old 13th-century church. It was begun in 1702, by masters Lluc Mesquida Florit, his son Lluc Mesquida Rosselló and his brother.
More research tells me the first two keystones of the vaults, with the Town’s escutcheon, are by sculptor Josep Antoni Oms.The altarpiece on the high altar dates from 1762. The organ, situated over the side door, was built by Lluís Navarro and finished by Damià Caimari.

In my visits over the past twenty years to Santa Maria the town has grown and grown. There are traditional houses here but they are accompanied by many new build apartments with wide ramblas outside their front door. New build is winning in this place these days as so many want to live here.

Good travel connections by train to Palma is one of the reasons. Visiting the traditional market on Sunday was an enormous pleasure. I saw friends, had chats and eventually got a seat to have a coffee. I will not leave it so long before returning to this wonderful authentic spot in Mallorca.