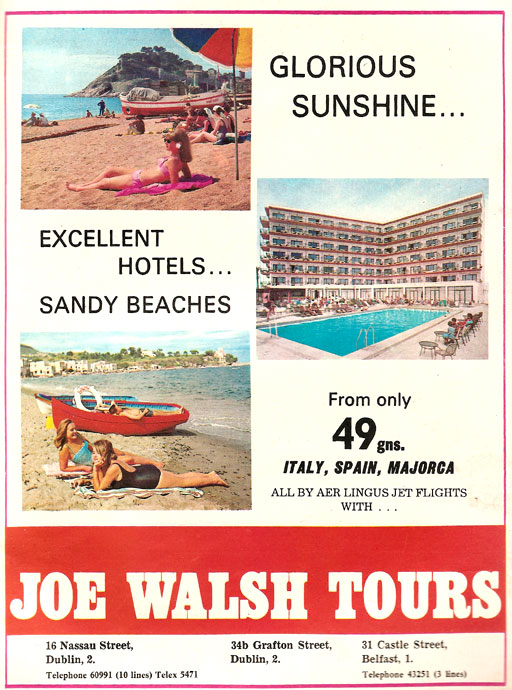 A Humans of Mallorca story by Shirley Roberts

Joe Walsh Tours was established in 1961 and was at the forefront of the development of tourism to Mallorca. They brought thousands to the island in the early days on specially chartered planes. The fun packed tourism of the 1960s’ went well with the expectation of the holiday which Joe Walsh created.

‘Joseph ‘Joe’ Walsh 1931-1995: “Joe” Walsh, travel agent and tour operator, was born in Bangor, Co Down, and educated at St Patrick’s College, Armagh. On leaving school he worked for the Ulster Transport Authority and later moved to London, where he worked for the firm Thomas Cook where he saw the potential for providing holidaymakers with a complete, affordable package.

He later moved to Dublin, where he worked for two travel agents before founding his own business, Joe Walsh Tours Ltd, in 1961 with the aim of providing the affordable package he had envisaged. Walsh emphasised that he was not in the business of profiteering, but he believed that by charging a modest price, clients would return to the firm year after year.

This philosophy transformed the Irish travel market by making foreign holidays accessible to large numbers of people who previously would have holidayed within Ireland. Air fares and having to travel through London had previously acted as a barrier to lower- and middle-income earners travelling from Ireland to locations such as Rome, Lourdes, and the Balearic Islands.

Pioneering new ideas within the industry, Walsh was the first Irish operator to charter his own planes and so reduce the overall price of the package holiday. In its first year, Joe Walsh Tours provided holidays to almost 2,000 clients who travelled to Lourdes or to locations in Italy and Spain.

His company was the only Irish-owned tour operator when he died, and it was voted Ireland’s number one tour operator in 1993 and 1994.’

Joe died in 1995 and his family run business continued until the Covid recession closed the doors for the last time on 27th April 2021.

Those still here from early days’ tourism will remember the many Joe Walsh customers who turned into friends. Many of them went on to buy their own holiday homes here and a little bit of Ireland was created (especially in the Santa Ponsa area). Soller had many Irish visitors too and Joe Walsh and Tjareborg fought for the accolade of being the best Tour Operator of the time. Long before the big guns arrived and TUI wasn’t even heard of.

It is a sad farewell to Joe Walsh Holidays and huge gratitude for putting Mallorca so firmly on the map for generations of Irish friends.