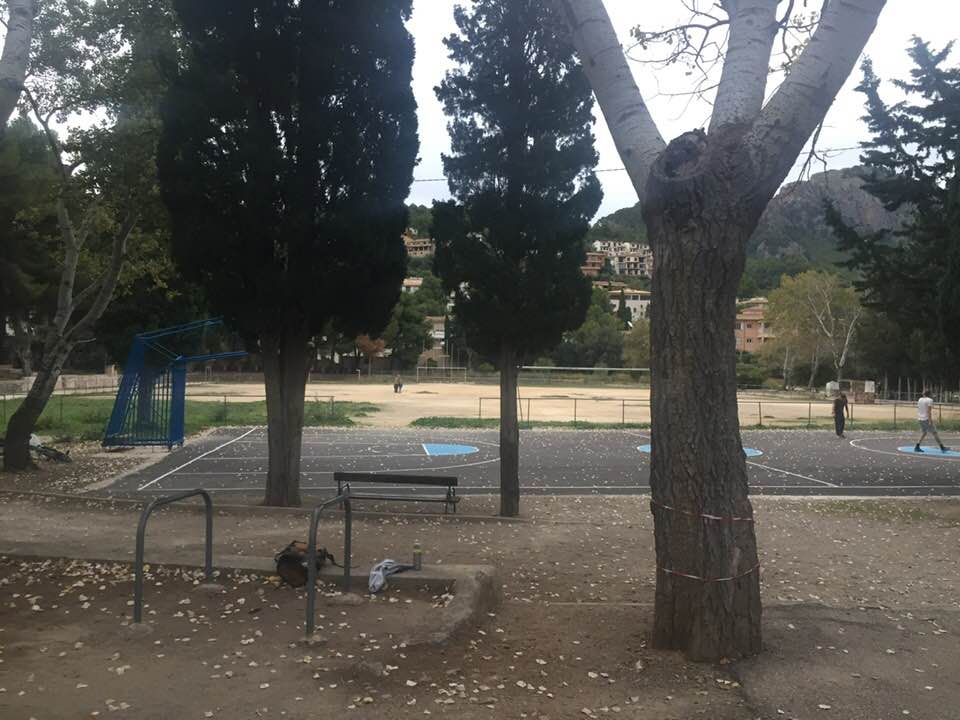 A frequent Nan’s Day Out for me is to our local park. Known by many names in the Port of Soller but mostly as the ‘Camp de Football’.  This is a park with a football pitch in the centre and a running track round the outskirts.  Swings for children on one corner plus a brand new basketball court.  The history of this place has just exploded into a 6.9 million euro pay out which has changed the current spending plans of the Town Hall.

The true name of the park is ‘Sports Field Infante Lois’ and it is the only park of any size in the Port of Soller. The past use of the park was as part of the Spanish Navy during the post war period when Spain created the Military Base of the Port of Soller. The sports area was used for the exclusive use of the military and created huge resentment in the area. For many years’ local children did not have the use of their very own space.  It is these, now grown locals, who are fighting for this space for their own children.

The use of the land eventually reverted to the control of the Ajuntament of Soller and then the court cases began.  Local people own the land and had no choice but to give it to the Military when requested. The discussions about the future ownership have gone on since 2004 when the Military gave up their claim on it. If the Town Hall were going to acquire and maintain the park they would have to pay money to the owners.  This has been the subject of dispute ever since.

In the meantime, the City Council have half heartedly maintained it but most of the time it looks like neglected scrubland. Local people are seriously fed up with this as they have a jewel in their neighbourhood for sport, exercise and fun. They just want it properly looked after and used.

I am not sure I can tell you the number of times this has been to court, appeal and counter claim. All I do know is the news broke last Thursday that the Town Hall must pay to the land owners the sum of 6.9 million euros and then the park will belong to the Town Hall.

The space is so very well used from football matches to children’s birthday parties.  This summer it was the site of the Port of Soller’s first ‘Drive In Movie Cinema’.  It is used for Fiestas, gatherings and the day to day life of the community. The feeling in the Port right now is one of relief, that at last ownership is allocated, and the Town Hall will have to maintain and make it safe for all users.

There are others. However, who are fearful that this huge outlay will see some politicians suggest that some of the land be sold for housing, to recoup some of the money.  This will run and run, the power of the people has made it very clear they want this space to remain for the use of all age groups, year round.

The community in the Soller Valley live in apartments and small houses so many children have little outside space.  This one large green space is the lungs of village and is used by the local school and as a play and meeting space for all.

I have spent hours here sitting watching children on swings or counting the laps as they run the track. The infrastructure, which is crumbling now, show that under Military hands it was a superb stadium with facilities beyond that of a play park. The football pitch, if restored to former glory could be very important in all the developments of boys and girls football in the Soller Valley.

This is a practical story of money and acquisition on one level.  On another it is the people claiming back their own birth right and shaking off the years when their property and lands were requisitioned under a Military order. Every community has its bruises and these have not fully healed here.   To bring the park back to the people will be a good start to putting the past firmly behind them and moving on into play, recreation and exercise.