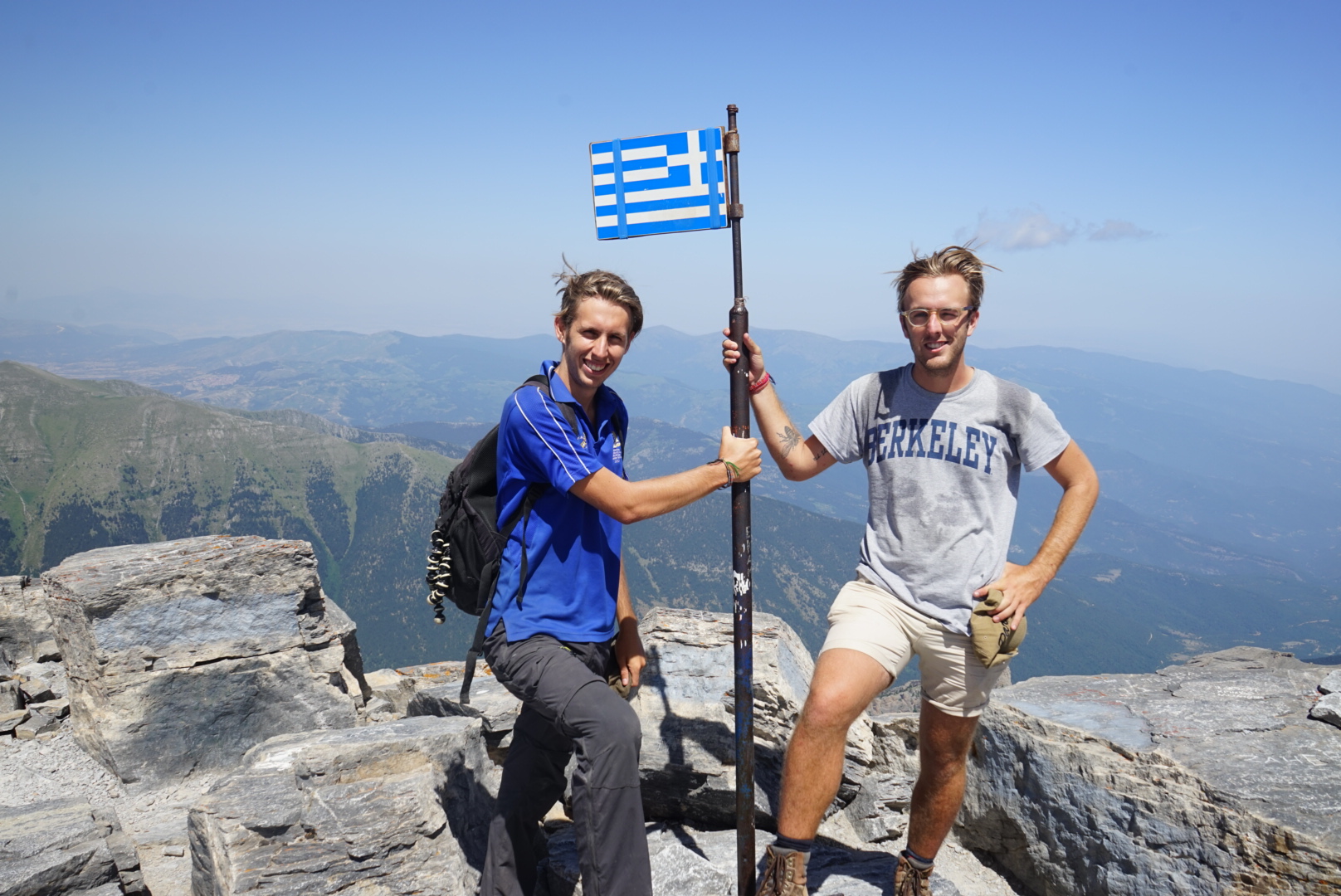 My Humans of Mallorca this week has a family tale to tell.  Mum, Lisa and Dad, Terry met in exotic places after trawling the world as Engineers.  Lisa was from England and Terry from Australia but their love story began in Sri lanka. Their engineering careers which set them on worldwide adventures meant that Macclesfield was never going to be home to Lisa forever.

It was, however the place that both their sons were born, even though, at the time, the family lived in Bangladesh. A return for six years meant the boys enjoyed an English childhood and great proximity to their family. This time also allowed Lisa to retrain as a Maths teacher to allow a more home based life while the children were growing up. Then the call to the sun and life in Australia beckoned and they exchanged one life for another.

Tom and Josh, the sons of the house did their growing up and education in Australia.  Tom did his BA in Film and Television and Josh pursued a medical career and became a physiotherapist. Both of them with mobile qualifications which could take them into many countries.  Indeed, at the time of writing this, Josh is in Cambodia helping in the rehabilitation of victims of mine blasts. This will be followed later in the year by a relocation to the Netherlands.

As for Tom, he and I spent time looking over his remarkable career for such a young man.  The Podcast world is his and he makes a programme every week for the very influential kids science podcast ‘Wow in the World’. The hosts Mindy Thomas and Guy Raz guide curious kids and their grown-ups on a journey into the wonders of the world around them. They go inside our brains, out into space and deep into the coolest new stories in science and technology. Tom is an integral part of the broadcasting and writing team currently with a big part to play in the exciting future of the company.

His start on Kids TV in Brisbane lasted three years and then it was off to Vancouver to develop his animation and podcast future. This was alongside his day job in an animation studio making cartoons. He describes ‘Wow in the World’ as a science cartoon for the ears appealing to the 8 to 14 age group plus their parents. This is an emerging market with so much future in it as the evolution of Radio. To be part of an evolution is a gift not given to many and Tom is enjoying the ride.

Christmas in Kula Lumpur in 2016 was to change the axis of the future for Tom and Josh.  They spent the holiday with their parents who were at this time living there. A New Years Eve plan made over the celebratory drinks resulted in a ‘post it’ note. This was a system that Josh used to write down something important in case he forgot it while out partying.

The boys had promised themselves in the past that one day they would travel the world together on a gap year. This is what they had discussed before the party took off.  Now they were committed.  The date was set after some saving and a little help from Gran’s will.  No planes just cars, boats, cycles, motorbikes, camper vans and feet.

This is the part of the journey that called for the camper van as they set off from Brisbane to Perth, a 6000 km journey.  Adelaide, The Great Australian Bight, the Treeless Plain, desert and more desert. Filming, conversations music was the backdrop and the first stage of the adventure went well. The boat taking them on the next step was due to sail in time to get the boys to Singapore for Christmas.  First rule of travel – chuck those well planned itinerary’s out the window and go with the flow.

A cargo ship delivering goods and commodities was their next home albeit 10 days later than expected.  Camper Van left on Australian soil and now the united nations of crew from Bulgaria, Rumania and Sri Lanka waited for them as the only passengers on board. Ten days of observation of the lives of people who spend most of their lives at sea.  The sheer hard work and fun was a revelation.  The Christmas Eve, on deck and roasting of the pig became one of the highlights of the trip.  The flags of all countries were the decorations of the table as the drumming of the Sri Lankans welcomed Christmas Day.

Singapore, Penang and the South Islands of Thailand were the next adventure. Eventually collapsing pretty sick in Bangkok.  Four days of food poisoning saw hallucinations and a wonder if they had done the right thing.  Hostel living and all the comforts of home were beginning to seem like a distant memory when they landed in Laos.

Laos is a Southeast Asian country traversed by the Mekong River and known for mountainous terrain, French colonial architecture, hill tribe settlements and Buddhist monasteries. It was here that the trip took on a different dimension as they met a group of people traveling just like them. They became a tribe who travelled together for a couple of months.  They explored the depressions of Cambodia. Enjoyed a long stay in Vietnam and cycled the four-day trail in North Vietnam. Then it was scary China…

The trains of China were their mode of transport.  A pleasure in many respects as these were all on a new rail network of only five years old. Apart from the transport and the beauty the idea that their movements were being watched and checked was unnerving. The police searches on the trains heading for the Xing Jang province were scary. Met off the train and taken to the police station for more questions before being escorted to their hostel.  In the course of their trip they were stopped around 8 time a day and made to produce documents and explain why they were there.

A 26-hour train journey to Kazakhstan changed all that and the sense of freedom was once again theirs. They loved Uzbekistan and their very favourite was Kurdistan.  The people were so friendly, hospitable and welcoming. A three-day hike with Kurdish guides was a highlight here and one of the reasons they will go back to this place one day.

Then a loop around central Asia including a 62-hour train journey on a utilitarian soviet train to the Caspian Sea…  A ferry to Azerbaijan across the sea to Baku took them to a money rich, oil filled world. The land of fire was their home for awhile as they watched the oil burn. Baku led to Georgia and a beautiful country and people.  Then trains led to buses to Turkey. A full range of adventures in Turkey and then the Greek islands before the arrival in Athens.

Next stop Ukraine and a visit to Chernobyl which was an ambition fulfilled.  This part of the journey was done with just the two of them.  The friends they made from Laos had all gone home to their lives in disparate parts of Europe.  A music festival in Hungary was the clarion call to get them all back together again.  This is what happened and after that for almost the whole route back to the UK they were able to stay in European countries with friends they had made en route.

In Austria they hired a car and travelled Switzerland, Italy and Germany in style. Staying with friends and their families gave them wonderful experiences and hospitality.  Italian grandmothers providing a feast still lives on in their memories. Then the home run beckoned as Brussels, Bruges and Paris were enjoyed.  The days were ticking on and the date was approaching when they needed to be outside the place they were both born.  Across the sea to the UK and the London and Manchester reunions.  Then, exactly on time the photograph was taken by a random passer by of them back where it all began.

longcut’.  Some of the adventures already appear on utube and can be viewed now.  Eventually this will be a group of 20 short films.

Tom Van Kalken, with all the countries he has explored had another to add to the list last month.  His parents have bought a house in Soller.   This had all taken shape while he and his brother were having their adventures.  Mum and Dad, not to be outdone, were making their plans too. A retirement plan of Australia for half the year and Soller for the rest has come to fruition.

Tom and Josh had never been to Majorca before and had no idea what to expect. The drive from the airport and through the Soller tunnel is always a definitive moment and those boys just ‘got it’.

Mountain walks and the classic charm of old town Soller really works for them.  They are delighted with their parent’s choice and are looking forward to really getting to know the place and the people.

To follow Tom and his work have a look at

‘Wow in the World’ Podcasts and