Loading...
Skip to content
Soller’s art, commerce and the station…
Published in the Majorca Daily Bulletin
Tuesday 10th May 2016
Photographs by Rachel Fox
When you arrive in the City of Soller by train you have a choice.  The tram is waiting for you to transport you down to the Port in rickety style or the station itself invites you to stay awhile.  Soller station is a wonderful arrival point and as you get off the train you are greeted by a wonderful Miro mural. The Tramuntana mountains which surround the valley are all there and the City and all its delights are spread out before you.  Two minutes from the place and you are in the centre of Soller in front of its fine Cathedral of the Mountains also known as the St Bartholomew Church. Before you set foot there I would really encourage you to stop and look at all that is on offer in our remarkable station. 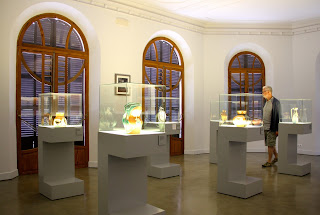 As you leave the platform you walk down the stone steps into an atrium which has doors on all sides.  You won’t find a Costa Coffee or a W H Smith instead you will find Art, Law and Commerce. This station is remembered by the people of the past as the location of the hotel that started the tourism to the area which was built in the 50’s.  The Island within an Island mentality came from this very spot.  As people either drove or rode horses over the mountain to get to Soller others arrived on the train.  Whichever way you came it was an adventure and when you arrived you stayed.  This meant that Soller square held dances every night and Sollerics gathered into the early hours. This was a space on the Island that was unique and many visitors kept this secret to themselves – they didn’t want to share this gem. 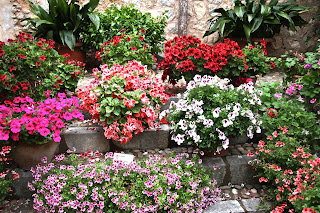 In 2016 the station is home to the Court Room of Soller on the top floor of the internal building.  The Judicial process on a local level is conducted there and it is the place you have to go to pick up official denunciations. On the next floor down are the offices of the Ferrocarril and this is a place we all spend regular time in.  This place is the key to the tram and train fare reductions for residents of the Soller Valley.  We all pay reduced rates for these journeys as long as we have had our official paper work checked, had a photograph taken and signed the relevant document. Then the stairs or the lift bring you to ground floor level for a beautiful experience. 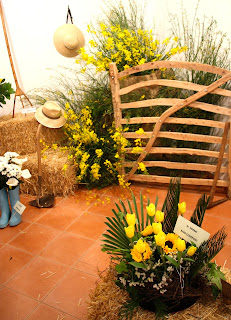 Soller Station is home to two galleries celebrating the work of the most famous artists that Spain has produced. The Picasso gallery houses work by Pablo Ruiz Picasso and consists of over 50 ceramics, plates, jugs and much more.  These were all created between 1948 and 1971 and are on loan to the gallery by the generosity of  Pere Serra.
The  Miró room has 14 etchings fromhis Lapidary series, and 21 in which he pays tribute to the Catalan Architect, Antoni Gaudí. All the etchings have been ceded to the station by Miró’s heirs in memory of Grandpa Miró. Miro was Catalan by birth and has Soller connections because his maternal grandfather was born here.  Miro has the honorary title of ‘Son of Soller’ bestowed on him by the City.

A shop selling local produce and souvenirs occupies the corner next to the galleries and that is the nature of Soller station.  You buy your tickets for train journeys at platform level and the rest of the building transports you to some of the finest artists and experiences that Majorca has to offer.
This week in Soller we have been celebrating the Firo.  The battle has been won for another year and the Christians were victorious again.   Many inaugurations of art exhibitions have taken place this week in honour of the Firo.  The new one at the station is particularly interesting.  A red person is sitting on the seat on the platform and he or she invites you to sit next to him and put your arm in his. The title of this work is ‘The Dreamer’ and has been created by local artist Francesca Marti. The ancient and the modern sit well in the art world of Soller. 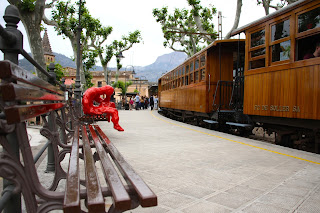 The station is just the start of the journey into the world of the Solleric.  There is so much to see, understand and discover and the stories are a fascination to me.  I hope you enjoy your arrival in our world on the train and linger in our station.  I know that you will be very glad you did…