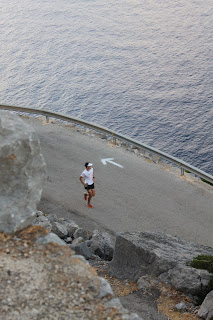 This Sunday marked the 33rd Triathlon of the  Soller   Valley  held on the  Repic   Beach .  The temperature was off the scale as it often is at this time of year but that’s all part of the ‘extreme’ nature of this event.  The cheerleaders, razzmatazz and loudspeakers rolled in to the Port together with all the  Marshalls  dressed in pink.  The competition is to swim, to cycle up and down the cliffs and then run a race.   The  Repic   Beach  resembles a fairground as all the supporters come to watch and annual rivalries are resurrected.  People come from all over  Majorca  for this race but at its heart it is a very local event and everyone knows each other as they train in the same gyms and mountain runs.
The holidaymakers stumbling from their breakfast to find a great spot on the beach on Sunday morning thought they had wandered into an action film.  They soon got into the swing of it and admired the finely toned bodies as they showed us all how it’s done.  As they scrambled out of the sea and onto the next phase of the race the sands were reclaimed for sandcastles and picnics and Sunday morning was restored.  I shared a lunchtime restaurant with the winners of the event who were laden with prizes.  I was interested to see the largest bottle of Tunel Hierbas as part of the haul so there will be a party going on somewhere tonight. 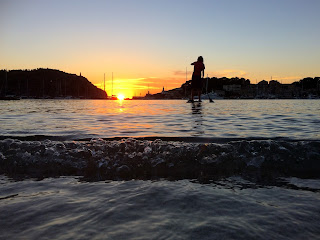 As the sun began its descent the beaches of the  Port  of  Soller  were used for other beautiful sports.  SUP has taken over as everyone’s favourite pastime and stand up paddle boarding is all the rage.  The beautiful pictures of the boarders as they blend with the sunsets are stunning and some nights this is taken to a different dimension.  Yoga is taught and demonstrated on the SUPs and is a great spectator sport.  People love to watch the athletic moves and balance on the boards out at sea.  So many people have tried this experience this year and rave about it. It has become the sport of 2015 from its gentle beginnings here last year. 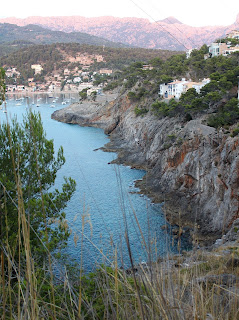 While the fit and beautiful take their glorious place on the seafront there are those of us walking the walk of the ‘Cholesterol routes of Soller’.  I learned this week that medically the island is divided up into recognised ‘walking routes for health’.  With an aging population the word is out from the health centres to get everyone moving.  The route that you will find people of a certain age walking is the straight road down to the sea past the Monument restaurant.  In the early days of building their stamina they are allowed to get the tram back to Soller but the goal is a brisk walk from City to the Port and back taking no more than an hour.  The temperature only gives a very short window of opportunity for these walks at present so from 7 am beware – you might get mown down by the elderly taking their ‘walks for health’ very seriously indeed.
One of the favoured mountain walks around the  Soller   Valley  is where route 221 goes between Soller and Deia past the  Castello   Church  which is currently being renovated.  This has closed the path while the work continues on it for another few weeks.  Notices have appeared warning walkers that when they get to this point on the route there is no alternative but to retrace their steps.  As you can imagine intrepid walkers just see that as a challenge and many of them have been reporting back that they  had the most glorious walks and carved out for themselves an alternative path in some overgrown land alongside.  This whole issue of who the land belongs to is fraught but our walker friends have had the best time chopping down the scrub and being the only people in this wonderful space.  Fortunately this contentious issue is soon coming to an end as the work is almost done – it would be a shame if it all erupted into an almighty row.
The busiest six weeks of the year have now dawned in the  Soller   Valley .  The English and German schools have broken up and that together with all the French holiday makers who return every year to their homes here means that Soller is almost full.  The Hoteliers are reporting that things are very good but it’s not their best year ever – yet.  It all hinges on how long the season actually lasts this year.  Some of the  Soller   Valley   hotels have already announced that they are staying open into November so there is hope that some records might be broken.
There is still room here for you – do come and see us soon – so much to see and do in this place.  Check out the events on the www.sollerweb.com daily Calendar.  You are very welcome…