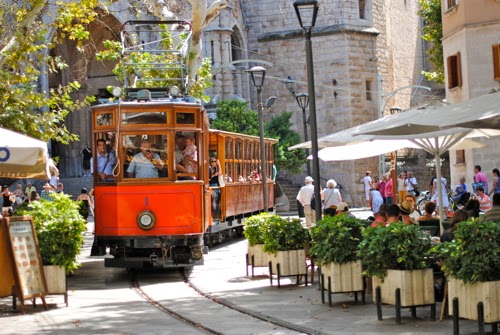 Life in Spain is no longer an easy choice financially and employment opportunities for seasonal workers has all but dried up with many more local people taking those vacancies. The influx of people from The Peninsula (Mainland Spain) is almost non existent as they have left these shores and gone to the UK or Germany or further afield. The migration that brought people from South America and other ex colonies of Spain to work on farms and building sites of Mallorca has ended. This has created a Mallorca where those that have jobs hang on to them and those that don’t either try and leave or are reliant on the charities that exist here to provide for their basic needs.

The latest census for Mallorca shows that in Soller and the surrounding villages of Fornalutx, Biniaraix, L’horta, and Deia that the population is actually rising whereas in the rest Mallorca it is stagnating or reducing. Something very special is happening here and the community is thriving and expectations for the future are running high. To define who the people are who are bucking the trend and making successful, purposeful lives in the Soller Valley would take a book but I will attempt an incomplete definition here.

The average age of the the incomers is the biggest change with more and more families making the move. The biggest influence is in the number of businesses which can be operated by computer from anywhere in the world. In the village houses of Soller there are people who are operating multi million Euro corporations. They leave their ‘offices’ wander down to the square for a coffee and recharge of the batteries and then back to the grindstone. The summer might find the afternoons on the beach and then a little more work on that wonderful computer before finalising the latest deal of the day. If all this sounds fanciful to you I can assure you that it is not.

The town houses of Soller and the villages all look very similar but peep through the door and wonders unfold with beautiful furniture, exquisite gardens and pools and an almost ‘Alice through the looking glass’ aspect. You open the door into a different world and thus it has always been here. The riches of the past from the returners from France and the colonies meant that this was always a rich place with a grand piano often taking pride of place in the entrada. These days it is the businesses that go on behind those doors that is the wonderland and the computer, internet and sophisticated communication has made it all possible.

The next group of incomers are the Easy Jet Commuters – the ones that leave us on Sunday evenings and return on Friday afternoon. Have a look at the Easy Jet flight schedule from Gatwick and you will see that they know their market and accommodate them. The mixture of companies who see the benefit of working four twelve hour days to accommodate this commuting lifestyle and the freelancers allows this sector to thrive. This in its turn means that there are many families in the Hidden Valley who have one parents undivided attention for four days a week and then pick up family life when the other returns on Fridays. This combined with the hundreds of people who are airline crew who choose to live in The Soller Valley and the pattern is truly being drawn for the future.

The Soller Valley is full of industrious people who live and work from here. This changes the demographics completely from the recent past when it was dominated by the retired and early retired people.. There are still plenty of people in that category but they are now outnumbered by the younger age group and this in its turn makes for other changes to life here.

The Soller experience is much more balanced now that all age groups are arriving. It is less like a retirement city and more like a normal working environment with a mixture of people at different ages and stages in life. The conversations in the Square are as likely to be as much about schools as they are about pensions and this is normal for Soller in 2014. For the people of Soller this is something of a shock as often their children have had to leave and find work in other places and now their City is welcoming the same age group of locals who have had to leave. The circle of life in all its manifestations is here.

To be a resident in Soller, in Mallorca needs an adventurous spirit and a ‘I’m just going to go for it’ approach. Sometimes the bureaucracy can be daunting – the Mallorquins love to stamp every official document three times before it is fit for purpose and that can be infuriating. Some rules seem only to suit the rule maker and make no sense to us at all but – just get on with it. Life is too short to spend any time moaning about the differences in life here. I’m afraid if it matters that much to you then you have probably made the wrong choice to move here. The Mallorquins march to the beat of their own culture and their own drum. They welcome you and let you in as long as you play by the rules and respect their way of life.

The services that are important range from schools to health service provision and the procedures about employment. All these issues are age related and carry a different set of rules. As far as children are concerned they have to go to school and if you are living here they have to be registered with the local authority as a child of school age. The decisions about sending them to the local schools in Soller or the private, fee paying International Schools based in Palma, Parc Bit and Marrataxi is yours and will occupy time and lots of local conversations while you make your decisions. The local schools in Soller all cost a little because there are different rules about charging parents for materials and books which does not exist in the UK. The cost of school dinners is relatively high here in Spain and the concept of free school meals is a rarity unless your income falls below a means tested level that you are prepared to declare.

The Health Service provision is different if you are under the normal retirement age. Recent changes to the rules means that for new people arriving here who are not currently in the Health Service System you have to have private health insurance until you are of Spanish retirement age. Take full advice on this matter with the Department of Health in the UK and your own insurance provider. This is a complex area that needs fully understanding by all parties before you make a permanent move.

Employment makes the third part of the complications of life here. Contracted, seasonal work is very much the norm here with unemployment benefit for the off season only payable if you have paid into the system long enough to be entitled to it. The benefit system in Spain is very different to the UK and is the reason that many people live on charitable benefits and food bank rations in the winter months. This is another area that needs truly understanding before moving and is the reason that the majority of incomers either start their own businesses here or contract to work for European companies remotely.

Education, Health Care and Employment are what holds society together and it is not unreasonable that it take time to understand the differences in these areas when you make a move. Language is the final part of this jigsaw and in choosing to live in the Soller Valley you have chosen to live among people who largely speak Mallorquin. Mallorquin is a dialect of Catalan and in Soller is tinged with a French accent to complicate matters even further. The majority of people understand Spanish but they choose to speak in their own dialect. The local schools teach in Catalan/Mallorquin as well as some lessons in Spanish and English. There is a huge debate going on nationally about the language of the schools which I will not go into here but a decision has to be made about how you live with the language. The language schools of Soller and Palma can give you everything from a gentle introduction to an intensive degree course. There are many who do not go down that route and pick up what they need from the language as they go along. The principle that it takes ten years to truly learn a language is a factor here with many people deciding that there are other things they prefer to do with their time.

The journey you make as a new resident to this area is yours and is unique,www.sollerweb.com exists to give a little insight into what you can expect. The experience,enjoyment and the frustrations are all yours – Enjoy the adventure …