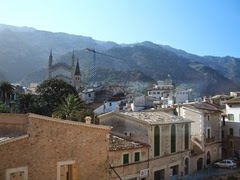 We all have the opportunity to be friends with the Police here in the hidden valley. The Soller Police have a face book page which they update regularly with masses of information and a translation of sorts. This means that we know when bad weather is coming or when a road is going to be closed or a diversion is in place. This was the source that alerted us to an attempted child abduction earlier in the summer – which thankfully came to nothing. The police are there in the centre of town with their office in the Town Hall. A tiny office which was converted at great expense to allow wheelchair access, is there for all the woes of small town living. Parked outside – where no one else is allowed – are the police cars of the area waiting for that call to take them on their way with sirens blaring. The latest message from the police is to thank us for reading their Facebook page and promising that they will always be there for us in good times and bad. It is reassuring ..

The human side of policing is very necessary in a town that considers ‘denouncing’ its neighbours as the norm. One of the differences in the judicial system here and the UK is the role of the police to investigate a complaint. In Spain if you have a complaint against another person you can denounce him/her without the police being involved to decide whether there is a case to answer. This means that a letter telling you to attend the local court to collect a ‘Denuncia’ is quite common. My own experience of this came when, in my previous life of running a recruitment agency in Soller, I was collecting fees from clients for placements made. After three months of letters and phone calls to one client he said he had enough of being chased for money and was going to court to ‘Denounce’.
This was despite the fact that he had no issue with the service and he agreed he owed the money. He was just annoyed that he wasn’t being left to pay in his own time and kept receiving reminders from us to pay. I duly presented myself at the Court in Soller (top floor – above the Station) and signed to receive the complaint. The end of this story took me to the main court in Palma and involved paying for a solicitor to represent me. The Judge could not contain his irritation and the client was ordered to pay forthwith and stop wasting everyone’s time.

Rubbish collection is the new hot bed of contention and destined to set neighbour against neighbour.
From October the winter rubbish collections are going to be reduced to five a week instead of the summer pattern of seven. There will be a fine of 60€ if you are caught depositing your rubbish in the bin before 8 pm. There are good reasons for the rubbish not to stay rotting in the bins all day and all sensible people, who know the rules, adhere to them. The new fine for non compliance comes with a hot line for neighbours to report each other to the Town Hall so that the fine can be imposed. Anonymous hot lines have a place in crime prevention but this is going a rubbish bag too far. The Soller community loves to talk and spends most of its day doing just that in the cafés of the town square. Maybe this issue will be discussed enough for the Denouncing not to be necessary. I do hope so.

Soller is looking inwards to the financial troubles that some of its people have. A charity flea market started on Saturday morning to raise funds for people in need. The Church, the Red Cross and the Town Hall know that this is going to be a winter of discontent and they need donations to help. Our local Eroski supermarket has a trolley at the check out for food donations to this fund.
On Saturday the trolley was full as the generous of Soller bought their shopping and more for those in need. If you didn’t know what that trolley was for – you do now. A little awareness and a small contribution from all can make such a difference.